Bruce Robinson and Alicia Previn on violin at right 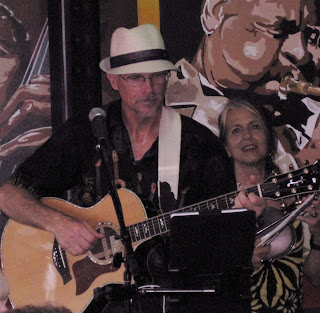 Posted by Bruce Robinson at 12:59 PM No comments:

Completed day 10 in studio yesterday. I have laid down the foundation for 33 tracks (20 songs completely re-recorded from the 1st cd plus 13 new songs I have written this year) for rhythm, vocals and drums. The new CD(s) will be fully and professionally produced this go around.

Taking a break until next Thursday as my granddaughter, Kayla, flies in today for a week-long visit. I will go in studio next Thursday as the bass player, Rick Nash, will lay down bass lines.

The following week, we will be back at it hard with world class sax player, Joe Marillo (http://joemarillo.com/ ), coming in for 8 tracks and keyboards pro, John Cain for a number of songs. Joe Marillo and John Cain are consummate professionals and have played both nationally and world wide with some of the all time best musical acts . Also participating on 5 tracks will be Aristotle, a recognized harmonica wizard who spends much of his time in New Orleans. The engineer, Richard Livoni, is an accomplished guitar player and will lay down leads on many tracks. I have the rhythm guitar and ukulele strumming and picking tracks done, along with vocals. Top notch keyboard and harmonica players also in line.

Gig a week from tonight at Le Papagayo in Leucadia………..lots of La Jolla HS alumni in town for that as our 40th reunion is the following evening at Birch Aquarium.

Rehearsal this morning in Oceanside.

Bruce
Posted by Bruce Robinson at 6:48 AM No comments: